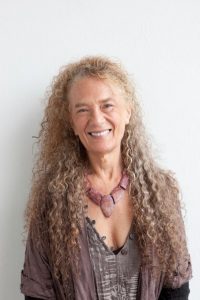 Margaret Jenkins, founder and artistic director of the Margaret Jenkins Dance Company (MJDC) is a choreographer and mentor to many artists as well as a designer of unique community-based dance projects. Jenkins began her early training in San Francisco at the Peters Wright School of Dance (modern). In the sixties, she moved to New York to study at Juilliard, continued her training at UCLA and returned to New York to dance in the companies of Jack Moore, Viola Farber, Judy Dunn, James Cunningham, Gus Solomons, Jr. and Twyla Tharp’s original company with Sara Rudner. In addition, Jenkins was a member of the faculty of the Merce Cunningham Studio and restaged his works for companies in Europe and the United States for over 12 years.

In 1970, Jenkins returned to San Francisco, and in 1973, formed the MJDC. She opened one of the West Coast’s first studio-performing spaces and a school for the training of professional modern dancers. This venue quickly became the center for local and traveling companies to show their work. Viola Farber and Merce Cunningham and June Finch were frequent guests, and dozens of young choreographers had the chance to experiment and take risks. This San Francisco rehearsal and performance space also became the “stage” for Jenkins and her Company. Jenkins takes great pride in being one part of the revitalization of the West Coast as a major center for dance activity. In 2022, Jenkins celebrates the 50th Anniversary of her Company.

In the last five decades, she has created an impressive body of work, with over 85 works created on her Company, as well as resident companies in the United States, Asia and Europe. Jenkins has received commissions from renowned national and international arts presenters and cultural institutions, including the Clarice Smith Center for the Performing Arts at the University of Maryland, Yerba Buena Center for the Arts (YBCA), The Dance Center of Columbia College in Chicago, National Dance Project (NDP), Krannert Center for the Performing Arts, Arizona State University, University of Arizona, New Dance Ensemble in Minneapolis, Repertory Dance Theatre in Salt Lake City, Oakland Ballet, Cullberg Ballet of Sweden, and Ginko, a modern dance company in Tokyo, Japan. In 2008, Jenkins was commissioned to create a new work for the 75th anniversary of the San Francisco Ballet. In addition, she has set work on dancers within various college and university dance departments.

All three of these companies, will join her in 2022 for the premiere of Global Moves in San Francisco.

She has also developed ambitious multi-disciplinary works such as Light Moves, an evening-length dance created in collaboration with media artist Naomie Kremer, Times Bones, Site Series (Inside Outside), and Skies Calling Skies Falling which toured extensively and to Sweden in 2016 and 2018.

As an organizer and enthusiast for dance, Jenkins served as Artistic Consultant to Dance About, a dance facility at the UC Berkeley Extension in San Francisco; sat on the steering committee for the 2002 International Women’s Day Conference in San Francisco; and facilitated a showcase for presenters to be introduced to the work of Swedish choreographers in Stockholm. She was a founding member of the Bay Area Dance Coalition and of Dance/USA, serving on its first Board of Directors as well as 6 years on the YBCA board. She remains an active participant on panels across the United States.

Jenkins is committed to advancing the health and future of the field of dance through a variety of projects. In 2004, she and her Company launched CHIME (Choreographers in Mentorship Exchange). CHIME is a unique mentorship program that fosters creative exchange and long-term relationships between emerging and established choreographers, creating an arena for the critical analysis of choreography outside of the academic environment. In 2019 she launched Encounters over 60, a program to provide new opportunities for these over-60 artists, often soloists, whose work needs to be experienced by our dance community again or for the first time, Ms. Jenkins has curated and will continue to do so – 2 week-long series of workshops and performances and outreach activities.

Coinciding with the commencement of CHIME, she opened her new studio, the Margaret Jenkins Dance Lab, in the South of Market area of San Francisco, her seventh working space in San Francisco, since 1970. (This Lab has since closed – a casualty of Covid -19).

In the last 17 years, CHIME has had many iterations:  including CHIME in Southern California, which engaged artists in Los Angeles County, and CHIME Across Borders, which brought internationally renowned masters of dance, in a position titled as Chair, to San Francisco to work with locally established choreographers. CHIME Across Borders Chairs have included choreographers David Gordon, Ralph Lemon, Elizabeth Streb, Tere O’Connor and Dana Reitz. CHIME’s latest iteration has Ms. Jenkins as a mentor to 3 emerging artists each year.

In addition, Jenkins conceived The National Dance Lab (NDL) a “product-driven,” as opposed to “market-driven,” model for creativity in the performing arts. Jenkins has also helped to structure and implement Choreographers in Action (CIA), a unique gathering of Bay Area choreographers who, in combination and collaboration, posit solutions to the myriad of issues that surround the working artist.

Similarly, Jenkins was one of the founding members of the Center for Creative Research (CCR) based in New York, which was a collection of eleven senior choreographers who came together under the leadership of Sam Miller and Dana Whitco to create artistic research residencies within universities.

For her unique artistic vision, Jenkins has received numerous awards, including a Guggenheim Fellowship, an Irvine Fellowship in Dance, the San Francisco Arts Commission Award of Honor, three Isadora Duncan Awards (Izzies), and the Bernard Osher Cultural Award for her outstanding contributions to the arts community in San Francisco and the Bay Area.  April 24, 2003 was declared “Margaret Jenkins Day” by San Francisco Mayor Willie Brown. On that day, she also received a Governor’s Commendation from Governor Gray Davis. In 2013, she was awarded a residency at The Rockefeller Foundation Bellagio Center in Italy.