Ariel Rivka Dance (ARD) is a critically acclaimed all-female contemporary dance company led by a married choreographer/composer team, Ariel Grossman (Artistic Director/Choreographer) and David Homan (Executive Director/Composer). Based in New York/New Jersey, ARD is committed to creating work with new music that explores emotionally driven movement with underlying currents of technique and structure. Collaboration and accessibility are the heart of ARD. It produces shows that incorporate various styles of dance and music, exposing our audiences to quality artistry in an inviting way.In 2016 Ariel was named one of Jersey (New) Moves Emerging Choreographers and was invited back to the 2017 festival as a standout past grant recipient. The company recently toured to Houston, TX, for Dance Month at the Kaplan Theatre and to the Gordon Center for Performing Arts in Baltimore, MD, and is looking forward to an upcoming choreographic & performance residency in Vero Beach, FL. ARD has also been presented at NJPAC, Rutgers University, the Gershman Y (Philadelphia, PA), Saratoga Dance Museum, Baruch Performing Arts Center, Dixon Place, White Wave’s Wave Rising Series and Inaugural Solo/Duo Festival, and REVERBDance. Past performances include collaborations with RIOULT Dance NY, Heidi Latsky, Elisa King, Carolyn Dorfman Dance Company, Carrie Ellmore-Tallitsch, Paul Dennis and Sean Curran. ARD has also held choreographic residencies at LaGuardia Performing Arts High School (NY) and Moving Youth Ballet Company (NJ) and was the recipient of a Lower Manhattan Cultural Council grant and a Nathan Cummings Foundation grant.

With a Masters in Early Childhood Education, Grossman has a passion for introducing dance to young learners offering family, community, and early childhood programming. Ariel Rivka Dance’s most recent family program is the touring work, “The Book of Esther: The Journey of Queen Vashti and Queen Esther,” which explores Ariel’s Jewish roots through a feminist lens. Traveling to Philadelphia, Ocean County, NJ, and various locations in New York City, “The Book of Esther” has provoked riveting conversations about artistic interpretation, biblical text, and the art of collaboration with adults and children alike.

Gordon Center for the Performing Arts 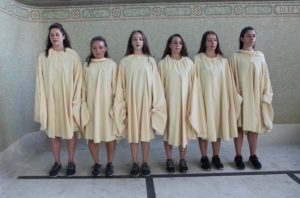 PODCAST No.46 – The Moving Architects

ABOUT THE MOVING ARCHITECTS

Caitlin Bailey is a dancer and visual artist who trained in dance at Marymount Manhattan College before receiving her BA in Dance from Hunter College where she studied under Alberto del Saz and Jana Fienman. Bailey has recently performed at The Sheen Center,  Dixon Place, and Arte Studio Ginestrelle in Italy with Amaris Dance; the Vision of Sound tour with Matthew Frazier-Smith; and Green Space with Danielle Nicolosi. As a choreographer and performing artist for Eden Productions and Love Creek Productions, Bailey’s work has been showcased at Culture Project’s Women Center Stage Festival, in IHI Therapy Center’s “LOVE, YOURSELF” Gala, The New School’s BFA production of “Polaroid Stories”, and the Producers Club Theatre. A Certified Personal Trainer and competitive Obstacle Course Racer, Bailey works with PhilanthroFIT Training while dancing for Amaris Dance and The Moving Architects.

Maggie Beutner is a performer from Denton, Texas. She attended the University of North Texas and graduated with a BFA in Dance, along with studying in the honors college. While in school, she performed in works by KihYoung Choi, Amiti Perry, Ana Sokolow, and taught and choreographed extensively across the state. Since relocating to Brooklyn, she has performed with Brandon Welch, Britta Peterson, and is a company member of kaycruddenco. Maggie joined The Moving Architects in 2015.

Rachel Gill is from Muncie, Indiana. She graduated with a BFA in Dance from SUNY Purchase Conservatory of Dance where she performed in works by Martha Graham, Anne Teresa De Keersmaeker, Kimberly Bartosik, and Shannon Gillen, and also spent a semester studying at Amsterdam School of the Arts. Upon graduation, Rachel attended Springboard Danse Montreal and moved to New York City. Since living in New York, she has performed and participated in multiple workshops with the Merce Cunningham Dance Trust, and has performed as a freelance dancer with artists such as Rosalind Newman, Elizabeth Dishman, Kathleen Helm, and Asako Miyahira. Rachel is currently a company member of GREYZONE Dance and The Moving Architects.

Jenny Gram, originally from Santa Clara, California, holds a BFA in dance and a BA in English from the University of Iowa. While a student, she performed the work of Carl Flink, Jennifer Kayle, and Chris Masters, in addition to choreographing her own work. Since she graduated, Jenny has performed with Jennifer Archibald, Armada Dance Company, and Mark Dendy in New York City and Shen Wei Dance Arts at the North Carolina Museum of Art during the American Dance Festival. She is a certified Pilates mat instructor through the Kane School of Pilates. Currently, Jenny is a freelance arts administrator, and makes her own choreography under The JGram Project. Jenny is thrilled to be dancing in her fourth season with The Moving Architects!

Seattle grown, Brooklyn based, Léla Groom received her early training from the Preparatory Dance Program at Cornish College of the Arts, and the San Francisco Conservatory of Dance. She holds a BFA in Dance from Arizona State University, where she performed extensively.  After graduating Summa Cum Laude, she relocated to New York City, where she is working as a freelance dancer and collaborator. She has performed with Treeline Dance Works, continues to work with long time collaborator Britta Joy Peterson, and is currently involved in projects with Inkyung Lee, and Falcon Dance. This is her second season with The Moving Architects.

Ashley Peters, originally from Utica, New York, holds a BFA in Dance and a BA in Psychology from University at Buffalo, where she was presented an Award of Distinction in Research for her thesis regarding the history and applications of jazz dance. As a freelance artist, Ashley has been a featured soloist with the Balasole Dance Company, toured Europe as a solo artist with Blue Lake Fine Arts Camp’s International Ballet Ensemble, and performed at Jacob’s Pillow with Melanie Aceto Contemporary Dance Company.  Ashley currently works at Gibney Dance Center and dances for Ballaro Dance, SoHa Dance and Treeline Dance Works.

MORE ON THE MOVING ARCHITECTS

University of Iowa – Department of Dance

University at Buffalo – Department of Theatre and Dance

University of North Texas – Department of Dance and Theatre

New Yorkers for Culture and Arts