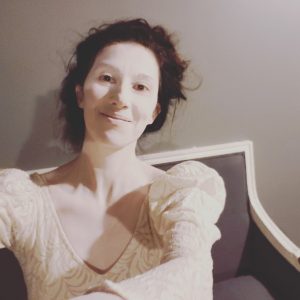 Vangeline is a teacher, dancer, and choreographer specializing in the Japanese postwar avant-garde movement form Butoh. She is the artistic director of the Vangeline Theater (New York), a dance company firmly rooted in the tradition of Japanese Butoh while carrying it into the 21st century, and the founder of the New York Butoh Institute (as well as the New York Butoh Institute Festival). She is a 2018 NYFA/NYSCA Artist Fellow in Choreography.

Vangeline’s work has been heralded in publications such as the New York Times (“captivating”), Los Angeles Times, (“moves with the clockwork deliberation of a practiced Japanese Butoh artist”) and LA Weekly to name a few. Time OUT Chicago named Vangeline’s, “one of the best Dance Visits of 2011.”  More recently, her solo Hijikata Mon Amour received critical acclaim in New York Butoh Institute Festival 2019.

With her all-female dance company, Vangeline’s socially conscious performances tie together butoh and activism. Her performances have dealt with subjects as varied as feminism, climate change, war and perceptions of gender. Vangeline was the recipient of a six-month artist residency at PS122 Performance Space (“New, New Stuff”); since 2006 she has received 32 prestigious awards from Puffin Foundation, Japan Foundation, New York Department of Cultural Affairs, New York Foundation for the Arts, New York Council on the Arts, Asian American Arts Alliance, Brooklyn Arts Council, and the Robert Friedman Foundation.

She is the founder of the 12-year running, award-winning program “Dream a Dream Project”, which brings butoh dance to incarcerated men and women at correctional facilities across New York State. Widely regarded as an expert in her field, Vangeline has lectured about butoh at Cornell University, New York University, Brooklyn College, CUNY and Princeton University (Princeton Atelier). She has taught and performed internationally  Chile, Hong Kong, Germany, Denmark, France, UK, and Taiwan.

Vangeline is the winner of the 2015 Gibney Dance’s Beth Silverman-Yam Social Action Award. Film projects include a starring role alongside actors James Franco and Winona Ryder in the feature film by director Jay Anania, ‘The Letter” (2012-Lionsgate). She has performed with/for Grammy Award Winning artists SKRILLEX and Esperanza Spalding, and her work is the subject of CNN’s Great Big Story – “Learning to Dance with your Demons”. She is the author of an upcoming book about butoh. 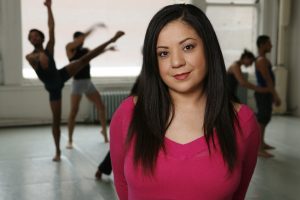 Michelle Manzanales is a choreographer and dance educator originally from Houston, TX. Michelle is the Director of the Ballet Hispánico School of Dance, but lends her artistic voice to all facets of the organization. She began working with Eduardo Vilaro, in 2003 as a dancer for his company Luna Negra Dance Theater of Chicago where she also served as Rehearsal Director in 2006 and as Interim Artistic Director from 2009-2010. Ms. Manzanales has created works for professional dance companies, universities, and schools across the nation including a commission for Ballet Hispánico’s main Company for their 2017 season at The Joyce Theater. Her 2010 homage to Frida Kahlo, Paloma Querida, and 2007 piece, Sugar in the Raw (Azucar Cruda) have been praised by the Chicago Tribune and Chicago Sun Times. “This dance isn’t just about one girl’s experience; it applies to everyone, of any gender, and of any culture,” said CriticalDance of Manzanales’ Con Brazos Abiertos (2017).