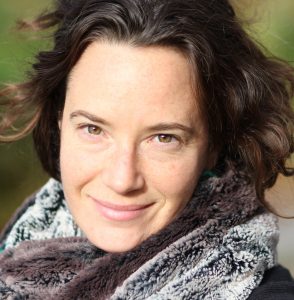 Melissa Riker is Artistic Director and Choreographer of Kinesis Project dance theatre. She is a New York City dancer and choreographer who emerged as a strong performance and creative voice as the NYC dance and circus worlds combined during the 90s. Riker’s dances and aesthetic layer her training as a classical dancer, martial artist, theatre choreographer and aerial performer. She creates dances on site – and in context. Riker invents large-scale outdoor performances and spontaneous moments of dance for individuals and corporate clients. Audiences and critics have called Riker’s work “a Marx Brothers’ routine with soul,” “A movable feast.” And from The New York Times, her choreography is: “comically acrobatic, gracefully classical, visually arresting.”

Ms. Riker is a 2016, 2017 and 2019 CUNY Dance Initiative Residency Fellow, 2015 LMCC Community Arts Fund grantee, 2019 Upper Manhattan Empowerment Zone Grantee. She has been commissioned by The Brooklyn Botanic Garden for a surprise large-scale work and performances of her work Secrets and Seawalls at Omi International Arts Center, Long House Reserve, Gateway National Park in partnership with Rockaways Artist Alliance. Ms. Riker has received commissions from Carson Fox and the Ephemeral Festival in 2013, 2014, 2015 and 2016 for large-scale outdoor events, NYU in 1998, for an outdoor work long before “flash mob” was coined, 2006 and 2008 grants from the Puffin Foundation for her work Community Movements, a dance work with community volunteers, Fellowships from the Dodge Foundation, Space Grant Residencies from 92nd St Y, The New 42nd St Studio, Gibney Dance Center, Velocity Dance Center, Seattle and The Joyce Theatre Foundation, and grants from The Bowick Family Trust and John C. Robinson to support the continued work of Kinesis Project dance theatre.

Lucy Sexton is a Brooklyn born choreographer, producer, and administrator who works in the fields of dance, theater, film, and advocacy. She is currently Executive Director of the cultural advocacy organization New Yorkers for Culture and Arts, working for equity and support for culture for all New Yorkers. Beginning in 2009, she has served as Executive Director of the NY Dance and Performance Awards, The Bessies, building them for the first time into an independent organization. From 2013-16 she worked as a Consulting Associate Artistic Director of the planned performing arts center at the World Trade Center, conducting field-wide outreach and developing the center’s artistic mission and plan. As a dance artist she works with Anne Iobst; together they create and performe the dance performance duo DANCENOISE which was founded in 1983, had a retrospective exhibit and performance at the Whitney Museum in 2015, and premiered a new piece at NY Live Arts in 2018. In theater, Sexton directed the off-Broadway plays Spalding Gray; Stories Left to Tell and Tom Murrin’s The Magical Ridiculous Journey of Alien Comic; served as dramaturge for Heather Litteer’s Lemonade, and Nora Burns’ David’s Friend; and she produced the Charles Atlas films The Legend of Leigh Bowery for the BBC and TURNINGwith Ahnoni (formerly Antony) and the Johnsons, and Associate Producer for Madeleine Olnek’s Codependent Lesbian Space Alien Seeks Same.

Sexton serves on the boards of Tuesday’s Children, formed after 9/11 and now serving family members of those impacted by terrorism and war worldwide; and the Holy Apostles Soup Kitchen, the city’s largest emergency food provider. She has been honored by Performance Space NY and Danspace Project for her contributions to arts in the city.

New Yorkers for Culture and Arts