By ecnortonJuly 19, 2016Podcast
No Comments 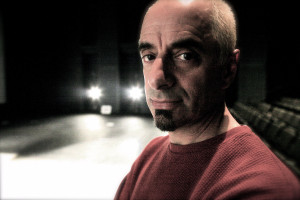 ABOUT MITCHELL ROSE:  PROFESSOR AND DANCE-FILMMAKER

Prior to becoming a filmmaker, Mitchell Rose was a New York-based choreographer. His company toured internationally for 15 years. Eventually he was drawn more to visual media and chose to become a filmmaker, entering The American Film Institute as a Directing Fellow. Since A.F.I., his films have won 78 festival awards and are screened around the world.The New York Times called him: “A rare and wonderful talent.” The Washington Post wrote that his work was “in the tradition of Chaplin, Keaton, and Tati—funny and sad and more than the sum of both.”Mr. Rose tours a program called The Mitch Show, an evening of his short films together with audience-participation performance pieces. He toured The Mitch Show in Kosovo as a U.S. State Dept. Cultural Envoy.Mr. Rose is currently a professor of dance-filmmaking at Ohio State University.

“Deere John” (and other films)