By ecnortonApril 12, 2021Podcast
No Comments 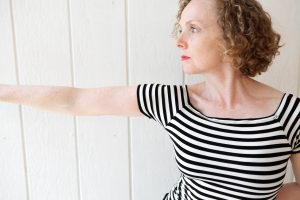 Megan Williams is an independent dance artist, choreographer, teacher and repetiteur, with a BFA from the Juilliard School, and an MFA from Sarah Lawrence College. Her choreography has been produced by 10 Hairy Legs, DanceNOW NYC at Joe’s Pub and Dance Theater Workshop, and by the Rivertown Artist’s Workshop, Barnspace, MIXT Co., Purchase College, Marymount Manhattan College, Connecticut College and Interlochen Arts Academy.  In addition to performing her own work, she can be seen dancing with choreographer Rebecca Stenn and in Netta Yurashalmy’s Paramodernities project. She performed and toured internationally in the 1980’s with the companies of Laura Glenn, Ohad Naharin, and Mark Haim, among many others. In 1988, she joined the Mark Morris Dance Group, dancing for 10 years, touring worldwide, teaching, and appearing in several films, including Falling Down Stairs (with YoYo Ma), The Hidden Soul of Harmony, The Hard Nut and Dido and Aeneas. Ms. Williams continues her affiliation with Morris as a guest performer , creating the role of Lady Capulet in Morris’ 2009 Romeo and Juliet: On Motifs of Shakespeare and dancing Bijoux at the 2014 Bessie Awards, guest rehearsal director, and guest faculty at the Mark Morris Dance Center. She has staged Morris’ work on the Purchase Dance Company, Vassar Repertory Company, Fieldston Dance Company, the Boston Ballet, and the Pittsburgh Ballet Theater and on students at the Juilliard School, George Mason University, Les Etes de la Danse (Paris), and Interlochen Arts Academy, and Cal State Long Beach among others. Ms. Williams has been Morris’ assistant in a variety of settings including ballet(San Francisco Ballet), Broadway( Paul Simon’s The Capeman , which she directed in concert version at BAM’s Harvey Theater in 2009), and television( VH1 Fashion Awards). From 2000-2013 she served on the modern dance faculty of the Conservatory of Dance at Purchase College, State University of New York. She was featured in Dance Teacher Magazine in 2010 and 2014 and has served on the faculties of Manhattanville College, Connecticut College, Hunter College and Marymount Manhattan College ( the last three teaching Anatomy for Dancers). She currently teaches Dance for Parkinson’s Disease in Rye, NY, and is on the renowned Dance for PD flagship teaching/lecturing team. She taught an ongoing Professional Level Ballet class at the Gibney Dance Center in New York City(now being taught via Zoom) and is on the faculty Sarah Lawrence College.  She has served on the board of directors of the Martha Hill Dance Fund since 2011 and is proud to have a producing credit on the documentary film Martha Hill: Making Dance Matter. She is in demand as a master class teacher and  guest lecturer. Williams founded Megan Williams Dance Projects in the summer of 2016 and was the DanceNOW Commissioned Artist in 2018 , premiering her  first full evening work, ‘One Woman Show’ to great acclaim at Joe’s Pub at the Public in NYC. Williams was an Artistic Partnership Initiative (API) Fellow at The Center for Ballet and the Arts at New York University in August/September 2019. MWDP was collaborating for over a year with composer Eve Beglarian on an evening length work with live music(supported by the O’Donnell -Green Foundation) that would have premiered at Danspace Project, NYC  in March 2020. Megan created two short dance films for the Katonah Museum of Art in October, 2020 and previewed a new work at Arts on Site, NYC in November.

“Hair” with choreography by Twyla Tharp

“War of the Worlds”