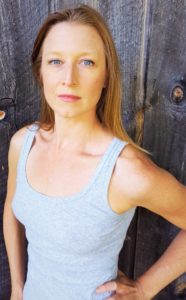 Dancemaker, Performer & Founder of N-root Danceart, Stephanie Nerbak is drawn to creating dance works that challenge her status quo, privileging the process of dance-making to leverage potent performances. She considers live dance to contain power for both the performer and the viewer, and believes performance is an opportunity for initiating conversations with ourselves and each other. N-Root Danceart was formed in 2016 as a result of those values. She holds an MFA in Dance from Sarah Lawrence College and a BA in Dance Performance from Point Park University. Stephanie was a recipient of a 2017 Individual Artist Fellowship from the New Jersey State Council on the Arts, and the 2017/2018 Jersey (new) Moves Emerging Choreographers Fellowship. Stephanie has presented her solo work through a host of opportunities and venues throughout NJ including Freespace Dance Company’s “A Woman’s Movement” & their 40+ Showcase (Montclair), Centenary University’s Dance Fest (Hackettstown), Your Move:NJ’s Modern Dance Festival (Hoboken), Bailar al Sol Dance Festival (Asbury Park), NJ Performing Arts Center (Newark), and Cross Roads Theatre (New Brunswick). Recently, Stephanie’s most well-known solo work, “Blend; I authenticate”, was integrated into an original verbatim theatre piece called, “TrueSelves: A new gender play”, produced by co-Lab Arts in New Brunswick. Over the past 20 years she has worked in a variety of performance settings across the U.S. and in Mexico – from traditional theatres to elementary school cafeterias, from Hollywood movie sets to public parks. She’s performed with companies such as Heidi Duckler Dance Theatre (Los Angeles), Los Angeles Modern Dance & Ballet, Donna Sternberg & Dancers (Santa Monica), and toured for five years with the award winning, West Virginia Dance Company. She has also had the pleasure of working & studying with powerhouse female dance artists such as Molissa Fenley, Naomi Goldberg Haas, Carli Marineck, Jodi Melnick, and Sara Rudner. While she makes the most of the moment, Stephanie is always curious about new sources of creativity and possible collaborations. Currently, she is looking forward to being a guest artist at Rutgers this fall and initiating a new improvisational dance collective in Jersey City.

Dances for a Variable Population