By ecnortonFebruary 24, 2016Podcast
No Comments 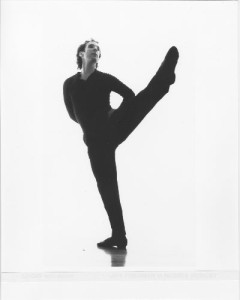 Jeff Friedman is a dancer, choreographer, dance documentarian and dance studies professor at Rutgers University-New Brunswick. He was born in 1956 and grew up surrounded by corn fields in the rural suburbs of Bucks County, Pennsylvania, near Doylestown. He began studying classical ballet at Bucks County Ballet with Carl Sandemeyer, a retired New York City Ballet dancer. Jeff graduated from Central Bucks-West High School in 1974 and studied architecture at Cornell University for 3 years, where he began seriously studying contemporary dance before he ran away with a dance company from New York City. After studying on scholarship with choreographer Twyla Tharp and company members in 1978, he then completed his 5-year professional degree in architecture from the University of Oregon in 1979. Jeff immediately moved to San Francisco, California where he joined the Oberlin Dance Collective as their first performing, non-choreographing collective member. Now known as ODC/San Francisco, Jeff performed and toured for 10 years with the company throughout the United States, including Alaska and Hawai’i, and internationally in Australia, at the 1988 World’s Fair; throughout Southeast Asia, on a State Department “soft-diplomacy” tour; and throughout the Soviet Union, in October-November 1989, while the Berlin Wall was coming down in Germany. He also performed in two avant-garde opera productions of Gluck’s Orfeo and Phillip Glass’ Satyagraha at the San Francisco, Los Angeles and Santa Fe Opera Companies. While based in San Francisco, Jeff also created several performance works, including multi-disciplinarily site-specific performance works, with photographers, videographers and composers as part of his POUNDING THE PAVEMENT site-specific dance festival; group modern dance works; and a solo dance concert created at a Djerassi Foundation Artist Residency that toured the United States as LOCUS Solo Dance, from 1990-1997.

In 1988, Jeff was part of a small group of dance artists responding to their community’s losses due to HIV-AIDS epidemic in the San Francisco Bay Area. Based on training from the Regional Oral History Office at University of California-Berkeley, he created LEGACY, an oral history project that records, collects, and makes accessible the personal and professional histories of Bay Area dance community members who are at-risk, due to their status as elders, to life-threatening illness; and cultural invisibility to the mainstream historical record. LEGACY’s methodology focuses on audio- and video-recorded unstructured oral history interviews in the long-form life-history format. LEGACY’s collection include recordings, edited transcripts, finding and contextual tools, as well as associated collections of personal papers of nearly 100 San Francisco Bay Area dance performers, choreographers, educators, administrators and critics, the largest collection of its kind outside of New York City’s Public Library for the Performing Arts oral history collections. For his pioneering work in dance oral history, Jeff has received the Isadora Duncan, James V. Mink and   awards for his service to the Bay Area dance community, and the oral history communities of the Southwest and Mid-Atlantic regions, respectively.

Based on Jeff’s performance, choreography and oral history careers, he created a new documentary-based dance-text solo work titled Muscle Memory (1992) using excerpts from LEGACY’s collection. While working as dance technique instructor at Sonoma State University, Jeff received a residency fellowship at Columbia College Dance Center in Chicago where he consolidated his interdisciplinary approach to documentary-based choreography. In 1996, he applied to and was accepted by the University of California-Riverside’s doctoral program in Dance History and Theory where he studied the theory, method and practice of oral history; phenomenological philosophy; Futurist photography; and Laban Movement Analysis. These study areas integrated into Jeff’s dissertation titled A Labanalysis of Dancers’ Life-histories toward Existential Awareness, earning his Ph.D in 2003. Jeff was appointed Assistant Professor at the Dance Department at Rutgers University-New Brunswick the same year.

Jeff’s publications include book chapters and peer-reviewed journal articles in the U.S., Canada, the UK, Spain, Germany, where he was a Senior Fulbright Teaching and Research Fellow in Frankfurt in 2010; Korea, and New Zealand, where he was Visiting Lecturer at Auckland University’s Dance Programme in 2007. Jeff has lectured at Stanford, Columbia, Brown Universities, and the University of California-Berkeley, among others in the U.S.; Kent, Bournemouth, Surrey, and Coventry Universities in the UK; Giessen, Leipzig, and the University of Performing Arts in Frankfurt, Germany; University of Warsaw and Charles University, Prague; Hebrew University, in Jerusalem, Israel; Yildiz Technical University in Istanbul, Turkey; and Victoria and Auckland Universities in New Zealand. Jeff teaches oral history training workshops nationally and internationally, including 20 years at the San Francisco Museum of Performance & Design; Texas Woman’s University; Simmons College, as Allen Smith Fellow in 2014; and for the Korea Society for Dance Documentation in Seoul. He is on the editorial board of the Korean Society for Dance Research Journal and Dance Chronicle (US) and was elected to a three-year term on the the Governing Council for the National Oral History Society (2013-2015). Jeff is also commissioned to record oral histories for the School of American Ballet Oral History Project in New York City.

At Rutgers University, Jeff teaches undergraduate dance writing and dance history courses and has taught dance technique, improvisation, performance skills, and dance composition and choreography. He also has taught oral history and performance and the history of interdisciplinary for various honors programs and the new Honors College. In 2014, he was appointed Graduate Director for the incoming MFA in Dance degree, beginning in Winter 2017, where he has developed a curriculum focusing on the interdisciplinary integration of dance theory and practice and critical pedagogy. He will be teaching dance philosophy and aesthetics, the history of interdisciplinarity and special topics courses in dance documentation and reconstruction and oral history and performance. He elected to serve for a three-year term on the Rutgers University Faculty Council (2014-2016) and, in 2014, Jeff also created a Dance and Parkinson’s Program, with free classes in two sites in New Brunswick.