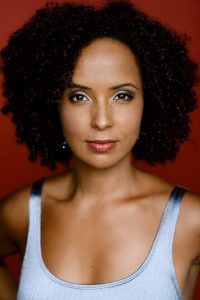 Originally from Calgary and a former New Yorker, Lisa’s career as a performer, solo-artist, choreographer and director has reached great heights. One of her greatest credits includes being an original cast member of SHUFFLE ALONG on Broadway choreographed by Savion Glover and directed by George C. Wolfe. With such an all-star cast, she performed at the 70th Annual TONY Awards, was a recipient of the Fred Astaire award for “Outstanding Ensemble in a Broadway show” and the A.C.C.A. Actor’s Equity Award for “Outstanding Broadway Chorus”. She was also both Off-Broadway and on tour for multiple years with the production STOMP directed by Luke Cresswell and Steve McNicholas and later then toured with Savion Glover and his production of STEPZ. In film/ television, some of Lisa’s credits include Amazon’s Original TV series Z- The Beginning of Everything starring Christina Ricci with choreography by John Carrafa, the Maya And Marty show c/o NBS and Secret Talents of the Stars with Maya Harrison c/o CBS.

Some of her previous overall performance highlights have also included being in the original ensemble of Dormeshia’s “Sophisticated Ladies” performing weekly at The Cotton Club in Harlem, being a member of Jason Samuel Smith’s company A.C.G.I, Max Pollak’s Rumba Tap, and Barbara Duffy and Co. Her foundation as a professional tap dancer truly began in Chicago as part of the legendary M.A.D.D. Rhythms (founded by Bril Barrett and Martin “Tre” Dumas III), which had her Direct M.A.D.D. Rhythms Canada in her hometown, Calgary, and then later continue great works working with The Chicago Human Rhythm Project with Lane Alexander’s BAM! and Martin “Tre” Dumas’ company JusLisTeN.

As a guest artist and choreographer, Lisa has appeared in venues such as Jazz at Lincoln Center, The Royal Albert Hall in London c/o Michele Drees’ Jazz Tap Project, and with bands such as the Revive Da Live Big Band, and both Marcus Strickland and E.J. Strickland in NYC’s jazz scene. She founded her own company TAP PHONICS in 2009 and has been commissioned to present for such organizations such as The Brooklyn Museum, 92Y, Gibney Dance and Fall For Dance North. Some of her most sought after choreographies include “Love Me Or Leave Me”, “So” and “Fragile” to name a few which can all be found online.

As an educator, she has been on faculty as Adjunct Professor at PACE University in Manhattan and at the University Of Calgary, and held appointments at NYU, Princeton University, the Juilliard School, USC, George Brown University and many others. Her outreach initiatives has lead her to work with Rosie O’Donell’s “Rosie’s Theater Kids”; a New York youth-outreach theater program, as well as countless after school programs on the South Side of Chicago c/o M.A.D.D. Rhythms and the Chicago Human Rhythm Project. She has appeared on faculty commercially at Broadway Dance Center, Steps on Broadway, The American Tap Dance Foundation, taught residencies at institutions such as The School at Jacob’s Pillow under the direction of Dianne Walker and at the Hinton Battle Dance Academy in Tokyo, Japan. She has been blessed to reach an abundance of dancers as well worldwide via the dance and tap festival circuit. This includes reputable festivals like Tap City, The Chicago Human Rhythm Project’s Rhythm World, RIFF/Woodshed, Tap Kids, Third Coast Rhythm Project, North Carolina Tap Festival, and the likes across Canada and in Brazil, Germany, Switzerland, Sweden, Turkey, China, and the UK. She now currently hosts her own series of courses online  at tapclasswithlisa.teachable.com and offers an online after-school program called “Tap For the PPL”. Her recent endeavors includes co-curating the Tap Dance Legacy Series along with Travis Knights in partnership with Toronto’s Dance Immersion providing the local black community free access to their cultural history. She also has written and directed her debut film TRAX encompassing her journey back to Alberta while discovering important local black history.

As an ever evolving artist, Lisa continuously immerses herself in studies and has trained in Meisner and Method based acting via Matthew Corozine and Susan Batson Studios in New York. She works with vocal coaches Shelton Becton and Susan Eichborn Young to continue her singing training, and loves the journey of rising to new discoveries as a performing artist.

She believes whole heartedly, to quote the great Maya Angelou, “when you learn, teach” and that the journey is infinite and full of fascination if we trust those nudges of inspiration. Please visit www.lisalatouche.com for further info.

Savion Glover at the White House