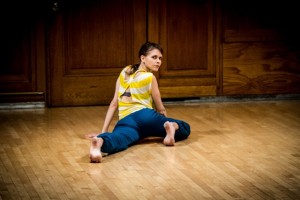 Her next evening-length work is being commissioned by New York Live Arts and is set to premiere in the spring of 2018 with a work-in-progress showing May 12-13, 2017.

Joanna has received support from the Mertz-Gilmore Foundation, Harkness Foundation for Dance, Jerome Foundation, New York Foundation for the Arts (NYFA) BUILD, Brooklyn Arts Council, Yellowhouse, and two Foundation for Contemporary Arts Emergency Grants. She was a 2013-2015 Movement Research Artist-in-Residence and a recipient of a 2014 Process Space residency through Lower Manhattan Cultural Council (LMCC). She has had residencies at The Camargo Foundation, Marble House, Jacob’s Pillow, Baryshnikov Arts Center, Djerassi and the Bogliasco Foundation. Joanna was a 2012 Fellow for Ailey’s New Directions Choreography Lab, a 2011 Lower Manhattan Cultural Council Swing Space resident and has worked in residence at Mount Tremper Arts. She was the Fall 2012 boo-koo space grant recipient at Gibney Dance Center and has participated in Sarah Maxfield’s One-Shot, a web-based solo performance relay.

She danced with Wally Cardona from 2000-2010, performing throughout NYC (including twice at BAM’s Next Wave Festival) the United States, Canada, Europe and Mexico. She is currently working with Kimberly Bartosik/daela, Stacy Spence and Kota Yamazaki. She has also danced for Netta Yerushalmy, Sam Kim, Sarah Skaggs, Christopher Williams, the Metropolitan Opera ballet, Daniel Charon, Nina Winthrop and others.

Joanna is on faculty at Movement Research and Gibney Dance. She has taught at Barnard College, NYU’s Tisch School of the Arts, Eugene Lang College – The New School for Liberal Arts, Long Island University and the American Dance Festival. She has studied Klein technique with Barbara Mahler since 2003, is originally from South Africa and has a BA in Architecture from Miami University (’98).