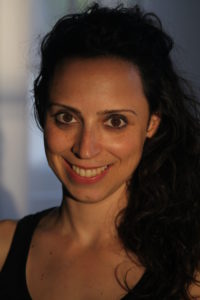 In 2013 Oshman was a resident choreographer at Attakkalari Dance Company, Bangalore, India where she created M to Stabat Mater by Pergolesi for the company’s 4 senior dancers. In 2015 she was a resident choreographer in Kyoto Art Center, Japan, where she created the dance film The Cuckoo’s Cry. This film has been shown in a variety of festivals around the world and is part of Ikono TV repertoire. Since 2016 M is performed in Europe with the prestigious Camerata Geneva. In 2018 M will premier in the US as part of Peak Performance program in Montclair State University with the New York Baroque Incorporated.

As of January 2016, Oshman is a resident artist in Fest’Factory, Bat-Yam, Israel. During her residency, she has created and performed Homeless Lullaby, a dance piece inspired by lullabies from around the world. Homeless Lullaby will be performed in Dresden, Germany in 2018.

Constantly researching theory of the choreographic act, Oshman is also a graduate of the Philosophy and History Department of Tel-Aviv University.  Other dance pieces by Oshman: Fitting Room, Yellow Bride, Gradation, Rising Down and Border Lines.