By ecnortonJuly 11, 2021Podcast
No Comments 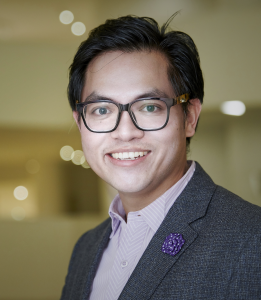 Born at a UN refugee camp in the Philippines to parents seeking political asylum from the communist Vietnamese government, Duke Dang immigrated to California growing up with the assistance of Section 8 vouchers, food stamps, welfare, and attending Head Start and public schools. An inaugural Gates Millennium Scholar, he earned his bachelor’s degree in Art History at Boston University where he studied abroad in Australia, Brazil, England, India, and South Africa. At New York University he earned his master’s degree in Performing Arts Administration. Since 2006 he has served as the General Manager of Works & Process, the performing arts series at the Guggenheim, where he oversees nonprofit administration and manages the logistics of the artistic programming. He and Producer Caroline Cronson collectively curate the organization’s programs and commissions that traditionally take place in the theater of the Guggenheim, but in recent years have expanded to include works commissioned and made in and for the Guggenheim rotunda. Works & Process programs have been regularly selected by The New York Times as “Best of” and in 2019 More Forever by Caleb Teicher and Conrad Tao, commissioned by Works & Process, was awarded a Bessie Award. In response to the pandemic, since April 2020 Works & Process has virtually commissioned 85 new works and supported over 300 artists. Under Duke’s leadership Works & Process has led the way in producing bubble residencies as a means for artists to safely gather, create, perform and work. The model created by Works & Process has since been duplicated by peer organizations including Dance Theatre of Harlem, Jacob’s Pillow, and the New York Choreographic Institute.  These bubble residencies have helped pave the pathway to the reopening the first live in person indoor performances permitted by the New York State Department of Health, which took place in the rotunda of the Guggenheim on March 20, 2021. Prior to Works & Process, his previous professional experience includes work at the J. Paul Getty Museum, the Smithsonian American Art Museum, the Glimmerglass Festival, Symphony Space, Sydney Theatre Company, and Boston Symphony Orchestra. In 2013, Dang with his husband Charles Rosen, co-founded and continue to serve on the steering committee of the Hudson Valley Dance Festival, benefitting Dancers Responding to AIDS. Now in its 9th year, the event has raised over  $1 million dollar to support social service organizations in the Hudson Valley and nationally. They live in both New York City and the Hudson Valley.

Works & Process at The Guggenheim

“Has Anyone Asked Artists What They Need?”