By ecnortonSeptember 27, 2016Podcast
No Comments 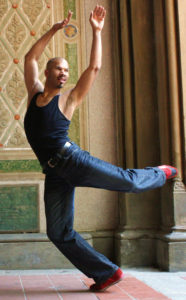 Christian von Howard is the Artistic Director of the VON HOWARD PROJECT, a contemporary dance company based out of New York City. Born in Honolulu, Hawaii and nurtured in the Big Ole state of Texas, Christian is an international performer, teacher and choreographer. His professional career began as a teenager at Ballet Concerto, under the Artistic Direction of Margo Dean. He would later become a founding member and Assistant Director of JAADE Dance Theatre (A sister company to Fort Worth’s Jubilee Theatre) under the direction Keisha Breaker-Haliburton. In Texas, Christian also worked with Contemporary Dance/Fort Worth, Darryl B. Sneed (Former Assistant Director of Dallas Black Dance Theater), Dancers Unlimited, Mary Kay Industrials, Dian Clough West, NOVA Dancing Company and many others.   Overseas in the mid 90’s, he graced the stage with the Trier Ballet (Germany) and Let’s Dance/Teatro de Reggio (Italy). In 1997, Christian co-founded 1*4*8 The Collective, a collaborative dance and theater company of seven artists creating work in the NYC area. From 2000-2003 he served as the Artist in Residence at Columbia College (SC) and the Associate Director of The Power Company, South Carolina’s leading contemporary dance company under the Artistic Direction of Martha Brim. As a concert performer, Christian has worked with such artists as Doug Varone, Fernando Bujones, Douglas Becker, Mark Dendy, Randy James, and he currently dances with the Fred Benjamin Dance Company, Daniel Gwirtzman Dance Company and the Alpha Omega Theatrical Dance Company. In 2006, Christian was awarded a Choreography Fellowship from the New Jersey State Council of the Arts. In 2010, his choreographic work was selected to represent the Mid-Atlantic Region at the 2010 National Conference of the American College Dance Festival Association at the Kennedy Center in Washington, DC.  His choreography has been produced in various venues across the globe including Germany, Japan, Bulgaria, Colombia, Chile, South Korea and in the states at Dance Theater Workshop (now New York Live Arts), Joyce SoHo, Dixon Place, DanceNow/NYC Festival, d.u.m.b.o. arts festival, the Ailey School and the Spoleto Festival (SC). He has also set work on various colleges and universities, which included University of Illinois Urbana-Champaign, Columbia College (SC), Jacksonville University, Texas Christian University, Winthrop University and various other schools of dance across the country. Christian has also been a member of the dance faculties of the Texas Christian University, Morris County Academy of Visual & Performing Arts, Mason Gross School of the Arts – Rutgers University, Columbia College (SC), and the Interlochen Arts Academy. Christian is a 2013/2014 recipient of the Distinguished Achievement in Teaching Award from Virginia Commonwealth University’s School of the Arts where he was part of the teaching faculty in the Department of Dance & Choreography from 2008 to 2014. He is an Associate Professor in the Department of Theatre & Dance at Montclair State University and concurrently teaches at the Alvin Ailey School in NYC where he has been on faculty since 1998. Christian serves as the Northeast Regional Director of the American College Dance Association. He holds advanced degrees in Performance and Choreography from the School of Classical and Contemporary Dance at Texas Christian University and from Tisch School of the Arts, New York University.