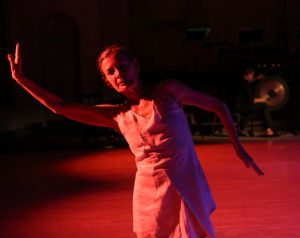 Molissa Fenley (Choreographer, Company Director and Dancer), was born in Las Vegas, Nevada, in 1954. She grew up in Ibadan, Nigeria, traveling there with her family in 1961, completing all of her early education there in international schools and her last two years of high school in Spain. She returned to the US in 1971 to study dance at Mills College in Oakland, California. Upon graduation in 1975, she moved to New York and founded her company in 1977. With Molissa Fenley and Company, and as a soloist working in collaboration with visual artists and composers, she has performed throughout the United States, Canada, South America, Europe, Australia, India, Indonesia, Japan, Korea, Singapore, Taiwan and Hong Kong. Her work has been commissioned by the American Dance Festival, the Brooklyn Academy of Music’s Next Wave Festival, the Dia Art Foundation, Jacob’s Pillow, the Joyce Theater, Lincoln Center, the New National Theater of Tokyo, The National Institute of Performing Arts in Seoul, The Kitchen, and Dance Theater Workshop/New York Live Arts. Both Cenotaph and State of Darkness were awarded Bessies for Choreography in 1985 and 1988 respectively. Molissa has also set many works on ballet and contemporary dance companies, most recently for the Toscana Dance HUB, Florence (Amdo), Rebecca Chaleff (State of Darkness), the Oakland Ballet (Redwood Park), Pacific Northwest Ballet, (State of Darkness), Repertory Dance Theatre (Energizer), Barnard/Columbia (Amdo), Robert Moses’ Kin (The Vessel Stories), and the Seattle Dance Project, (Planes in Air). She is a Guggenheim Fellow, a Fellow of the American Academy in Rome, has enjoyed residencies at Yaddo, the Bogliasco Foundation, the Baryshnikov Art Center, Djerassi and is twice a recipient of awards from the Asian Cultural Council to visit Japan. Molissa is Professor of Dance at Mills College, in residence in the spring semesters, and on the faculty of NYU’s Experimental Theater Wing, and often teaches choreographic and repertory workshops at other universities, most recently at Bennington, Barnard/Columbia and Hunter. Seagull Press/University of Chicago recently published Rhythm Field: The Dance of Molissa Fenley.  Recent performances include Their Mark at St. Mark’s Church, New York and Archaeology in Reverse at the Mills College Art Museum.

Lincoln Center Out of Doors Festival

Atlantic Center for the Arts