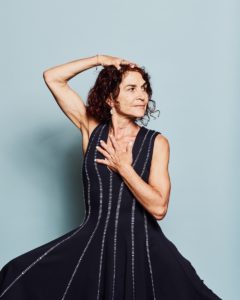 Jody Oberfelder is a director, choreographer, and filmmaker. Her most recent work, Zaubernacht, is a fairy tale, a commission by the Kurt Weill Foundation.  Upcoming are two ‘conversation’ pieces: On the Move Shortly,to be performed at St. Pancras Staion July 29, 2018 in London. Together with dramaturg Katalin Trencsényi, this devised piece gathers material from conversations that feed directly to the dance.  Things,(August 2018)is acollaboration with the Brisbane, Australian quintet Topology, who specialize in creating music from speech patterns and melody. Other immersive work: 4Chambers, (2013-14) a piece about the heart, was performed in an historic home on Governors Island and in a former hospital and The Brain Piece(2015-18)achoreographed experience: a union of movement, film, neuroscience and sound, giving audiences an interactive opportunity to engage with their minds in motion. The third of this trilogy: Madame Ovary, tackles the body as a site of intuition, agency, and birth?  Castle Walk, a danced-through tour of a Baroque Palace in Portugal (Fall 2017) was created in collaboration with Arte Total in Braga, Portual.